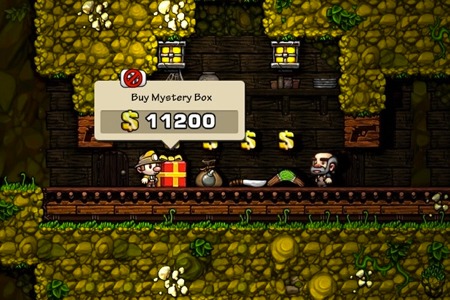 Yesterday I picked up my boy on his last day of school before the summer holidays. He caught my eye as he exited his building and his face lit up. Seven years old, eight weeks of summer ahead of him. As we walked home together, my bag filled with a year of exercise books of steadily improving handwriting, I caught him humming snatches of something familiar. Something, in fact, I had stuck in my head, too.

“What’s that you’re singing?” I asked.

“A song from Spelunky,” he said.

We’d played together on the weekend. Well, I played and he watched, giving advice and support when another spike trap killed me. He’s scared of playing himself, particularly of the ghost that comes after you when you take too long to finish a level.

The tune was stuck in my head because I’d played it during lunchtime with some colleagues. We didn’t do very well, but that, I’m pretty sure, is the point of its multiplayer mode.

“Did you get killed by the ghost, Dad?”

“No, but we got killed by everything else.”

“Did you get killed by the robot spider?”

“You mean the big spider?”

“Yeah, it waits in its web and jumps down on you when you walk underneath it.”

“Yeah. And snakes and wasps and jumping spiders.”

“Did you get killed by any skeletons?”

Come to think of it, we didn’t see a single skeleton. “No, but we got killed by shopkeepers.”

“Shopkeepers? Why did they kill you?”

“I had died and was a ghost, and I thought I’d see what happened if I blew one of things a shopkeeper was selling out of his door. He thought we were stealing it and he attacked us. Then they all attacked us.”

His eyes drew wide in excitement. “Why did they all attack you?”

“They put a wanted poster up of us in their shops so they knew to attack us. They even post a shopkeeper by the level exit because they’re so upset.”

“Do they still have the wanted poster up the next time you play it?”

Luckily not. My boy seemed relieved when I explained. We walked on, both humming.

Spelunky is a little clockwork world in which items and enemies behave in defined ways, but when mixed together cause a delicious feedback loops that you can, with experience, predict. My boy loves systemic games like this, games that are built on coherent systems that you can play in an open-ended way. Toy boxes like Minecraft and Plants Vs Zombies, Animal Crossing and (we play this together) Civilization - where he can tinker and learn cause and effect.

He spends hours playing them, or would if we let him. And these are the kind of games that, though they were much cruder back then, I liked when I was a boy too, especially Elite. Where anything seemed possible.

“The second one.” My heart burst with pride.

Spelunky came out on Xbox 360 a couple of weeks ago, but has been available for free on PC for several years.

UPDATE I followed up this piece in 2019 with my son’s continuing relationship with Spelunky in Seven Years Later.